For the last several days I’ve been distracted by an issue that has become an interesting case study. My involvement in resolving this issue reminded me of the many lesson I’ve learned about social media, and gave me an opportunity to jump back in as a practitioner, using my skills, experience and training to affect change (all things I love to do). This review, that I posted on the College of Charleston Facebook page on Saturday evening, helps to frame the issue:

I want it to be clear, we turned to social media after trying to affect change through conventional channels (telephone) for the three days leading up to this. After three days of frustration, we felt that through social media we had a higher likelihood of being heard. That is an assumption that is highly dependent on the organization you’re attempting to reach. In this case, College of Charleston did not appear overly concerned about whatever discourse was taking place on social media. Sure, they were aware of my posts and the growing following that was building up, but they didn’t respond in a manner that led me to believe they were concerned about the damage that was being done to their brand image. It was fascinating. Normally I’m the one coaching a client on how to respond to attacks from someone like me. This time I was the one on the offensive and I was evaluating their response, or lack of response, every step of the way.

As you can tell by the review, I tossed College of Charleston a softball. I told them that I love the institution, consider myself a brand ambassador, and invited them to rectify things. “Show me that you really care and that you’re better than this. Reaffirm my belief in you and my love for this institution. Moments like this define brands. Who are you going to be? My name is Dan Dunlop and I’m easy to find.” This was an open invitation for them to engage me and address my concerns. To that end, I intentionally used a tone that did not feel irrational or irate. I didn’t want them to think they were dealing with a troll. Once I posted the review, I followed up by posting photos of my daughter’s new suite to the College of Charleston Facebook page. The photos were compelling.

My wife (Scotti) and I had hoped that the initial Facebook review would get an immediate response from someone at College of Charleston. (It should have.) But, just to drive home the point, I took to Twitter and Instagram an hour later and started sharing our story and posting photos. I used the @CofC Twitter handle so they could not be missed by the folks monitoring CofC’s Twitter presence. Here are a few sample Tweets: 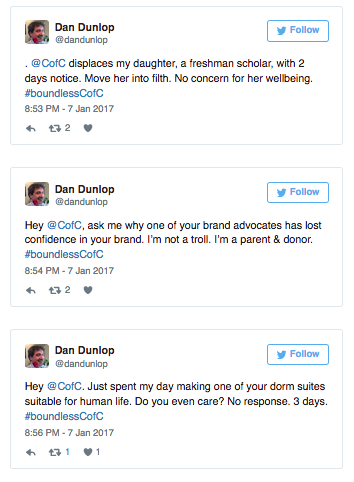 One thing you’ll notice is that after a few Tweets I started to use their #boundlessCofC hashtag that is the theme of their current fundraising campaign. This was an intentional move on my part to get their attention by disrupting the fundraising/development apparatus of the institution. Once the Tweets and Instagram posts started, the people at College of Charleston should have taken action to engage me.

By the following morning, there was still no communication from anyone at College of Charleston, not even a Tweet saying: “We hear you and take your feedback seriously. Please give us a number and we’ll contact you offline.” In the world of social media, 12 hours is a lifetime. They should have contacted me immediately after I posted the review on Facebook.

In all, I posted 129 Tweets over three days. I can’t tell you how many times I Retweeted other people or had my Tweets Retweeted. Other people began jumping in as well. My wife and I shared our story on the parents ListServ, of which we are members. This is a very active online community.

Sharing this on the ListServ was a good move for a few different reasons. First, it got our story out in front of other parents who had similar experiences with the housing department. Second, the members of the ListServ are not afraid to speak up and they quickly began sharing their horror stories. Third, an unintended consequence of this entire effort was that all of the communication helped to empower people – both parents and students. I can’t tell you how many private messages my wife and I received from parents and students who wanted to thank us for taking on this initiative. It was incredibly rewarding. Many of these people had voiced displeasure in the past but felt that they were not heard. They knew, by watching our campaign, that we were going to be heard and that Scotti and I were going to champion the cause. Let me stress what an important role Scotti played.

Here’s an example of a private message I received through Twitter from a College of Charleston student:

Here are a couple of responses from parents on the ListServ:

It fascinated us that all of the stories on the ListServ about bad customer service didn’t seem to get a reaction from the College. My concern was that perhaps the stories weren’t getting the right people. It is unclear which members of the leadership team ever see the ListServ. So, one of the steps I took to make sure that College of Charleston knew that we were not alone in our complaints was to share stories that were posted on ListServ as images attached to my Tweets. Here are a couple of examples: 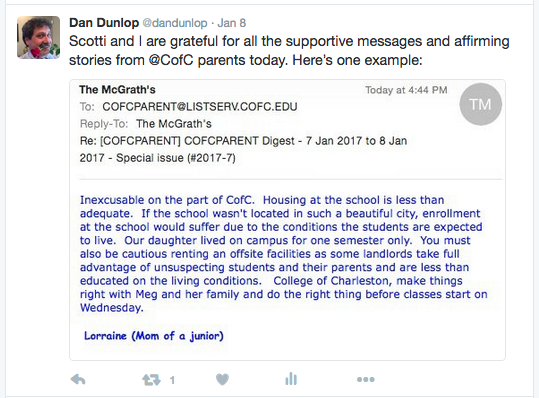 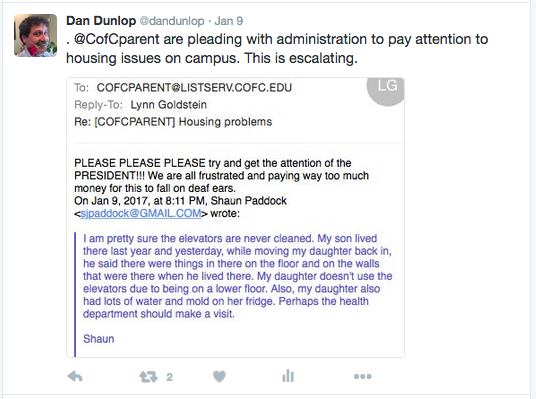 I’ve always believed that one of the essential elements of a successful social media campaign is repurposing content across platforms. In this case we shared photos and parent stories on Instagram, Facebook and Twitter.

On Sunday morning at 9am we received our first contact from an executive at College of Charleston. It was a very thoughtful email from an assistant vice president. However, she acknowledged that she is on the academic support side of the house (rather than facilities) and it was not within the scope of her role to resolve this situation. But the email did give us hope and the views she expressed were heartfelt.

Later that afternoon (1:21pm) , as Scotti and were driving back to North Carolina, I received a message on Twitter from College of Charleston asking for my mobile number. I gladly shared my number and assumed this meant they would call me.

During the ride home Scotti got a call from the woman in housing who had refused to take our calls earlier in the week and had failed to respond to our messages. The conversation was completely unsatisfactory as she took no accountability for the problems and claimed to be completely unaware of the issues involved. It was clear that she was not the person who could fix this problem.

We got home at 6pm and I still had not received a call. Surely someone was going to call me. Why else would they have asked for my number? I checked my email and found a message from the head of marketing asking for my mobile number. Odd, I had already sent it via Twitter.  “So sorry to hear of your experience. The College will certainly address this. Your daughter’s health and safety are of utmost importance. Can I have your phone number so that our residence/facilities team can call you immediately?” At this point in the story I will tell you that I never got that call. No one from the housing/facilities group ever called me. The first person to call me from College of Charleston was the President, but that’s jumping ahead.

By Monday night Scotti and I were really starting to wonder what it would take to get the attention of decision-makers at College of Charleston. So, we began phase two of our marketing plan. And yes, we had a plan that involved the escalation of our efforts over time. Here are the elements of phase two:

This meme mimics the look of the banner across the top of CofC’s Facebook page.

We drafted our email to President McConnell and sent it off on Monday evening. Tuesday morning I was on an airplane, heading to NYC, when I got a message from my office that the president of College of Charleston had called for me. He asked them to convey to me that he appreciated me emailing him and that he was going to meet with the involved parties from his team that morning and would take action.

When I landed at JFK President McConnell called me and shared the details of the actions he was taking. He seemed sincere and believable. I asked him to please call Scotti and share all of this with her. He did so immediately.

This is a good news/bad news ending to the story. First, after all of our efforts on social media, it was an email to the president that finally broke through. I’m convinced we could have kept Tweeting and posting for weeks and that second level of leadership at the College would not have taken action. I believe they are just used to parents and students complaining and use to problems going away on their own. We were just the latest parents with a gripe. They figured we would eventually go away. Second, it is disheartening to think that the customer service mindset that the president clearly embraces is not part of the culture of his organization. And it clearly is not. It certainly does not exist within the housing/facilities department. In fact, on Tuesday morning I started Tweeting suggestions that they attend customer service training at the Ritz-Carlton. 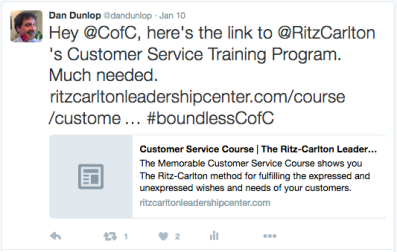 Do I have confidence that change will happen at College of Charleston? No. I believe we need to stay engaged and formalize the relationship we’ve formed with other parents and students. One thought involves forming a formal group (students and parents) that advises the College on housing issues. It wouldn’t have to be endorsed by the College, but it would be cool if they would jump on board. Another idea is to start a Facebook community dedicated to housing issues. One thing we do know is that we will not relax. All we’ve done so far is get the attention of the president. We are a long way from actually affecting change.

What’s one thing I wish I did differently? I wish I introduced a campaign-specific hashtag from the beginning. This would have established a theme and would have made it easier to measure the impression and reach of the campaign. I honestly didn’t expect the campaign to go on beyond the first evening. That was a serious miscalculation on my part. I assumed they would understand the impact of this campaign on perceptions of their brand and I was wrong. This is an important take away. You can’t assume that you are dealing with rational people who understand the impact of social media. Remember, the Storfiy, Tweets, Facebook review, and Instagram posts will not go away. They are now part of the story of College of Charleston and fully searchable. The damage is not just in the moment.